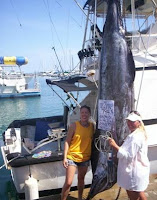 I had an invite to be on this Boat ! "If I only knew then what I know now!" I work weekends so I had to pass on the invite.

Sponsored by the Lahaina Yacht Club the Wahine fishing tournament lasted 2 days and used spring time "Jungle Rules" as in they were only out to have fun. Start time was Midnight:01 Saturday morning and ended 5PM Sunday evening. First day out 1 boat caught a Blue Marlin around 400#; however my friend Rhona and the girls caught the biggest Pacific Blue Marlin @ 794lbs ! Next day another Blue Marlin about 600# was caught; however it was not big enough to win.(yea for my friends :-)

*The Boat: Tai Pan II 2 (the old Goodfellows boat) * The Vessel: 42' Bertram *The Captain: Nat * The Anglers: Jessica & Lisa (spring "Jungle rules) * The Prize: Dinner for 2 * However even better than that is the 2 Gold Marlins the ladies get to put on a necklace: for their huge Marlin they brought in~ courtesy of the Lahaina Yacht club! 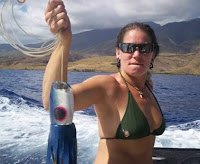 It took aprox. 45 minutes to get the fish to the boat with all 6 girls & the Captain helping out (remember Jungle rules apply) The just under 800# Pacific Blue Marlin caught off Maui was half dead when they got it to the boat; & get this...they killed the giant Marlin with Vodka, by pouring vodka over it's gills. (Rhona thinks she might have poured half the bottle down it's throat first! :-)
Now I heard someone say what a waste of Vodka; however 1 of the ladies brought vodka just for that reason-to kill the Blue Marlin before bringing it onto the boat. *You don't want a live active 800# marlin on your boat!
Posted by Athena Walsh at 5:06 PM