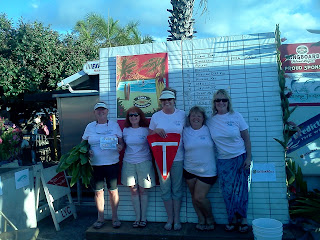 We're in the Money $$!
The water balloon fight was half the fun, the fishing boats met outside of Lahaina Harbor for the early morning balloon fight. I think we had close to 100 balloons on our boat. 1 of the boats cheated and had 2 men in wigs and bikini tops doing all of the balloon throwing, they got us good a couple of times, the 2nd time we turned the water hose on them :-)

22 boats entered this years 34th annual Lahaina Wahine Jackpot Tournament. We were supposed to go out on Talewalker, however that fell through & we ended up chartering 1 of Start Me Ups (7) boats: the Das it with Captains Denny Putnam & Randy. We had our ti leaves ready, and our Captain knew just where to go. 1 of their other boats had caught a Marlin the day before, so we headed out to that area off Lana'i. The crew really cared about getting the winning fish, they knew the rules and what to target and what not to bring on board.   Rona Rittner pulled in a 33# Ono off the lighthouse; while on the "radio" we heard 1 of the other fishing boats caught a 150# Marlin (we later found out it was actually 246.1 pounds!!) and about an hour later Juanita Linal pulled in our 125# Blue Marlin!

Keep in mind we now think that there was a 150 pounder caught, in order to win we think we either need to bring in a larger Marlin or we need to tag & release a smaller Marlin. 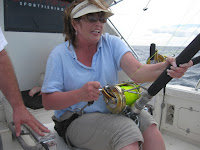 1 of the reasons I was so impressed with our crew is that Randy was ready to either tag & release our Marlin if he thought it was going to be less than 150# or bring it onboard if it was over the 150#. As soon as it got close to the boat Randy knew it was less. We got our our "official" waterproof camera to get the photo of the Marlin being tagged.  I think it took about 10 minutes to bring it in. Juanita had never been fishing before, you see those nails in the photo? I told her at 1 point that if she broke a nail, I would pay to have it fixed. Juanita replied "F...that I'll buy a new set if I have to, this fish is coming in!" Needless to say I think she's now hooked on sportfishing :-)

We got 2 more Marlin strikes that afternoon, mine was next and of course it was about 250#, we thought that might be the $ fish, however it came off my line within the first minute.  Bummer, it's "the fish that got away story". 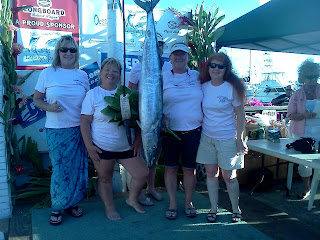 I have to say again I was very impressed with the crew; after Randy set the lines and we we're on our way out, Captain Denny Putnam came downstairs and had each 1 of us ladies sit in the fighting chair, so we could get comfortable with everything. He showed us how to use the real, move the line, how to use our legs instead of our backs and shoulders etc. Each of us spent 5-10 minutes in the chair, even Rona who goes fishing all the time (her boat caught the 795# Marlin last year) wanted to practice. As Captain Denny said...he wants to catch that big fish just as much as we do, so he likes to improve all of our chances by giving us hands on learning instruction first. (something I am told he does on all of his charters, If you are thinking of fishing from Lahaina, I would highly recommend Start Me Ups ~Das it and it's crew)

I Have to say, i had not really planned on getting in the chair and bringing in a fish, i simply wanted the experience and photos, not to mention the fun of it all.*including dinner at the Lahaina Yacht Club the next night. However because Captain Denny spent so much time with me, i felt comfortable enough to get in the chair when we got that 250# Marlin strike...for an exciting 60 seconds or so! I won't say it was the best 60 seconds of my life...but it was damn close :-)

For you fishing buffs out there..we used 80-100# test line~stacked.
Posted by Athena Walsh at 5:15 PM No comments:

Posted by Athena Walsh at 4:53 PM No comments:

Athena Walsh
Blog by Athena Walsh; I work for Rascal Fishing Charters for the last 20+ years. I also sell Sport Fishing and Bottom Fishing Trips out of both Ma'alaea Harbor and Lahaina Harbor. I love to fish and i participate in the Wahine (Ladies) Tournaments. Ask me about Fishing on Maui, Hawaii.
Newer Posts Older Posts Home
Subscribe to: Posts (Atom)