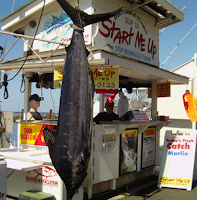 I was in Lahaina the other day when the fishing boats that went out that day started coming back in-all flying flags! Start Me Up had 2 boats out: Action with Captain Patrick does the "extreme" that departs @ 3:30A.M. so they are out at the fishing buoys by sunrise. Captain Patrick came in with several Mahi Mahi, while Captain Timster brought in a 211# Blue Marlin (if he caught anything else it got lost in the crowd and I forgot to ask...). I tried to get a video of the crew with the Marlin, however the one of the crew kept getting in my way. It is still a good short video, so I am putting it on here for you to watch. 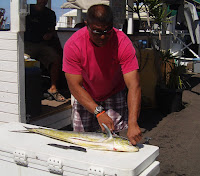