The Pacific Blue Marlin is at the top of it's food chain, and is the largest, most beautiful, and one of the most powerful fish in the Ocean!

The males rarely get over 300 pounds, while the female is your trophy fish, coming in at up to 1,800 pounds! They feed primarily on tunas and other palagic fish. Pacific Blue Marlin can be caught year round, however the summer months of June, July and August are the best fishing for Blue Marlin.

The thrill of hooking up to one of these huge beasts is the hope of every fisherman and is one of the things that keeps us all going out as often as we can. Pacific Blue Marlin can put up a great fight! Jumping in and out of the water, with lots of surface action, bringing in one of these monsters can take several hours. If you get a boat that likes to live bait, the Aku is a favorite with fishermen. They say where there’s Aku, there’s usually Marlin. Once you Rig your fresh caught Aku, the boats troll at slow speeds just outside the school creating the disturbance and fear that predators (Marlin) sense so well.

One 589 pound Marlin we know of took just over 6 hours to bring in! Since this particular Marlin was caught on Rascal Fishing charters during a tournament, that means she was a big money fish! Only the angler who hooked up to her was allowed to touch the pole and he had to bring her up and in, all alone. For 6 hours he fought to bring her in, knowing he couldn't just let go, because then the whole crew losses out on the tournament money, not to mention the fame and fun that goes with winning a big Fishing Tournament. (Good Job Dave!) 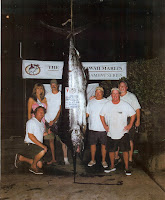 Blue Marlin are typically caught around Maui and the Big Island of Hawaii, trolling with artificial lures and live bait. Most fishing vessels encourage a catch and release program on Marlin if possible.

Captain Kevin, the owner of Rascal Fishing charters (out of Maalaea Harbor, Maui) sent me over this 90 second video of a Blue Marlin as they bring it up to the boat. Captain JJ is intent on bringing this big marlin close to the boat so he can release it.